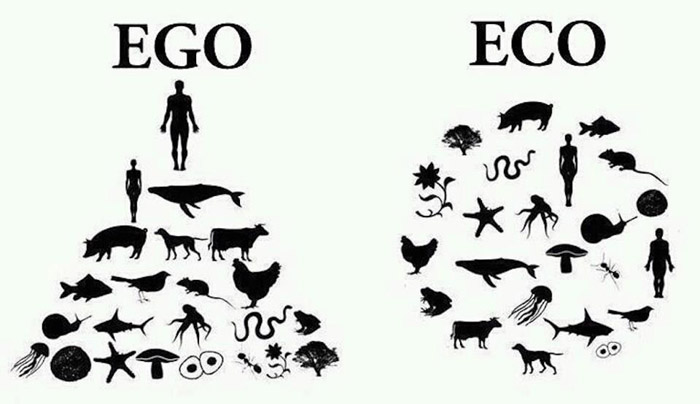 The average American eats about 200 lbs of meat per year.  That’s a little over half a pound a day.  And thats just the average.  Some of those people are eating Ribs & Alice Springs Chicken® 1/3 rack of savory fall-off-the-bone baby back ribs paired with a tasty 5 oz. grilled chicken breast topped with bacon, honey mustard sauce, sautéed mushrooms, Monterey Jack and Cheddar!

Changing an American diet to a vegan diet would reduce CO2 emissions by 1485 kg per year per person.

The report, Livestock's Long Shadow  concludes that the livestock sector (primarily cows, chickens, and pigs) emerges as one of the top two or three most significant contributors to our most serious environmental problems, at every scale from local to global. It is one of the largest sources of greenhouse gases - responsible for 18% of the world’s greenhouse gas emissions as measured in CO2 equivalents. It produces 65% of human-related nitrous oxide (which has 296 times the global warming potential of CO2) and 37% of all human-induced methane (which is 23 times as warming as CO2).

Red meat is linked to heart disease, the number one killer in America.

Animal protein has been linked to osteoporosis.

Eating excessive meat can clog your intestines leading to IBS and illness.

People who eat meat have a higher rate of obesity.

People who eat meat have a higher rate of type 2 diabetes.

Then you throw on top of that Animal rights issues.

The antibiotics they pump animals full of, Global warming,

Destruction of indigenous habitats, The waist from factory farms choking the enviroment. . .

Really it just goes on and on and on.

Well, there are a many good reasons to give up eating meat.  The reasons most people say they are going to continue to eat meat are things like "I like it.", and "It tastes good." which are really shallow reasons when you get right down to it.  I can agree with all of the above, and for me, Im allergic to soy and I tend to be hypoglycemic so protein is important.  I do enjoy eating meat and have a family of people who also enjoy meat but wanted to make a difference in how I relate to my food.  Food may be single largest source of habitat destruction but you cant just stop eating.  For my 2009 new years resolution I decided to try and eat 1 meal per day vegan, 1 meal vegetarian and 1 meal in which I can 3 oz of meat.  That’s about a 50% reduction off the average American diet.


Its easy to make a vegan breakfast.  Oat meal with almond milk and a serving of fruit would be one example.  You can even add in a cup of coffee.  Just leave out the creamer. Or for a vegetarian breakfast add in a scrambled egg or a glass of milk.


A vegan lunch could be a lentil soup with bread and hummus.  Add grated cheese to the soup and butter to the bread and you have a vegetarian lunch.


A conventional dinner could be something like a light chicken stir fry with 3 oz of meat or about half a chicken leg less minus the bone.


I have been on this program for about a year and I have found it easy to keep up with.  Recently I heard someone recommending to have a vegan day once per week, but from experience, I think its much easier to be vegan for 1 meal per day.   It also adds up to 7 meals per week instead of just 3 vegan meals per week.